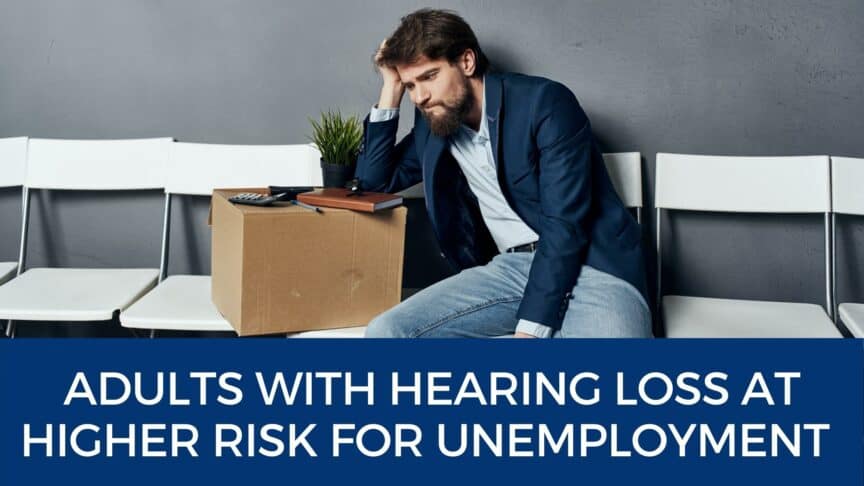 While hearing loss has generally declined in the US since the early 2000s for people under age 65 (possibly due to the decline of manufacturing employment and greater awareness of the importance of hearing protection), it is still a major concern for the aging population. As Americans are living longer than ever before, many of us are also working later into life. For that reason, hearing loss is likely to continue to be a problem for those in the workforce.

A Study On Hearing Loss, Education, Income, and Employment

A study funded by the National Institutes of Health and published in 2015, called “The Socioeconomic Impact of Hearing Loss in US Adults,” analyzed data collected in the 1999-2000 and 2001-2002 cycles of the National Health and Nutrition Examination Survey. The researchers retraced a known association between hearing loss and lower educational attainment (not completing high school). They reported that those with hearing loss are 3.21 times less likely to finish high school than those with normal hearing.

Surprisingly, after controlling for educational attainment, age, sex and race, they found that adults with hearing loss are 1.58 times more likely to have low income (less than $20,000/year), and even more likely (1.98 times) to be unemployed or underemployed.

The measure used to define hearing loss was the standard established by the World Health Organization—25 dBHL (decibels Hearing Level), adjusted for asymmetry and pure tone average. This threshold is what is generally considered to be “mild” hearing loss.

The results of the study imply that even though hearing loss contributes to lower educational attainment, lower educational attainment does not fully account for the tendency for those with hearing loss to have lower income, or to be unemployed or underemployed in adulthood. In other words, hearing loss introduces major income and employment problems for adults at any age and of any race or gender (though minorities tend to experience the effects disproportionately), even if those adults succeeded academically.

For the purposes of this study, causes were not examined directly. The researchers looked at a broad set of age groups, including those who were hearing-impaired from birth. While noise and age are generally understood to be major contributors to hearing loss, it’s also known that other modifiable risk factors such as smoking tobacco and an unhealthy diet can contribute to hearing loss later in life.

The researchers did not study the impact of hearing aids directly, but we may infer that anything that would mitigate the effects of hearing loss on a person’s life could counteract the trend toward low income and unemployment/underemployment. Hearing aids are anecdotally reported to improve a person’s experience in the workplace, and it has been studied that hearing aids improve social relationships, improve a person’s outlook, and more broadly improve communication skills. All of these benefits are known to translate to better performance in the workplace, independently of their association with hearing aids.

Some people operate on the false assumption that hearing aids will be a problem for them at work. They may think hearing aids make them appear “old” and will open the door to ageist treatment. On the contrary, hearing aids can counteract the negative impressions that hearing loss can make in certain workplaces, ultimately leading to smoother interactions and better relationships with coworkers, bosses, customers, or anyone you interact with in the workplace.

If you’re concerned that hearing loss may be a problem for you, make an appointment for a hearing test today. We can identify whether you have hearing loss, how much, and help you find a set of hearing aids that can improve your life at work, at home, and everywhere you want to go.