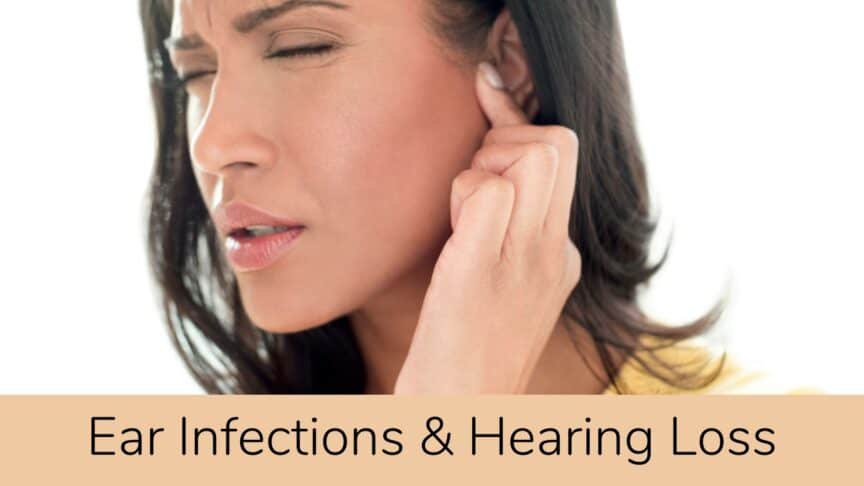 We all know that loud sounds can cause hearing loss, and awareness is growing about hearing loss that comes from prolonged exposure to softer sounds (as low as 75 decibels). These types of hearing loss are called “sensorineural,” as they derive from damage to the parts of the ear that transduce (convert) mechanical sound energy into electrical energy, in the inner ear. But there is another kind of hearing loss, called “conductive,” that is caused by problems with the outer or middle ear. This type of hearing loss is usually temporary, and is most often caused by ear infections.

Parts of the Ear

The outer ear is the part of the ear that is exposed to air outside the body. It includes the eardrum and ear canal, as well as the visible parts of the ear. The middle ear is just inside the eardrum. It is a hollow cavity that contains the three smallest bones in the human body: the malleus, the incus and the stapes. The cavity of the middle ear (called the “tympanic cavity”) is connected to the throat via the auditory tube (formerly known as the Eustachian tube).

Cause of Middle Ear Infection

When bacteria from an upper respiratory infection travels through the auditory tube and into the tympanic cavity, this causes a middle ear infection, or otitis media. This type of ear infection is most common in children, largely due to the horizontal position of children’s auditory tubes. Auditory tubes change their position through adolescence and become more diagonal, making it harder for fluids to travel from the throat to the middle ear in adults, and consequently causing adults to have fewer ear infections.

How Ear Infections Cause Hearing Loss

The infection will inflame the tissues of the middle ear, which can constrict the auditory tube and make it unable to regulate pressure between the middle ear and the outside, as well as allow for the possibility for fluids to collect inside the tympanic cavity. If fluid does collect, it can constrict the movement of the eardrum and the bones of the middle ear, which prevents them from passing sound on to the inner ear. This is why this type of hearing loss is called “conductive:” because it is a problem with the mechanical conduction of sound from the outside to the inner ear.

The good news is that the hearing loss caused by ear infections usually goes away. You should definitely see a doctor if you are suffering from an ear infection, especially if it has caused hearing loss, but in most cases the doctor will suggest that you wait a few days before they prescribe antibiotics. Most ear infections will heal on their own, and there are a number of problems with overuse of antibiotics. On the individual scale, the microbiome can be disturbed and make a person more prone to future ailments. And on the societal level, we need to be concerned about the production of antibiotic-resistant “super-bacteria,” which we risk creating through an evolutionary process of killing off the majority of bacteria that cannot withstand antibiotic treatments, leaving a higher and higher percentage of bacteria that will not die through contact with antibiotics.

If an ear infection doesn’t subside on its own, antibiotics should be prescribed after a few days. If the infection is allowed to persist, the eardrum is at risk of rupture or perforation. Especially if a person suffers from recurrent ear infections, the eardrum is at risk of becoming less effective due to the development of scar tissue from repeated damage. In cases where this has happened, hearing aids can be used to help the patient recover the majority of their hearing ability.

Since most ear infections do occur in children, it is the recurrent childhood ear infection which is of most concern. Some pediatricians, on seeing a patient with recurring ear infection, will recommend ear tube surgery, where a small incision is made in the eardrum and a tube inserted. This allows pressure to equalize between the outer and middle ear when the auditory tube is constricted due to infection, and allows fluid to drain from the tympanic cavity to the outer ear. This helps reduce pressure on the eardrum during infections and prevent hearing loss in the long term.

If you or a loved one are experiencing symptoms of ear infection or hearing loss, contact us today! We provide ENT and audiology services and we are here to help.