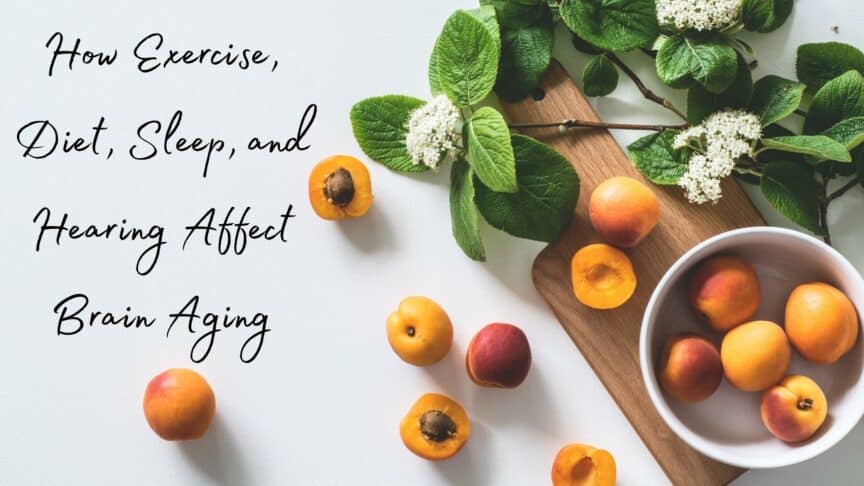 Aging impacts the entire body, including the brain. The brain ages over time which mean that cognitive processes become less flexible. This includes decision-making, memory, learning, and completing tasks. Brain aging can slow these processes down, requiring more time to perform cognitive functions. Although this is a natural process that occurs over time, research shows that there are specific lifestyle factors that can impact this process by accelerating or delaying it. In a recently published report, researchers from the University of California San Diego identified four factors that support brain health: exercise, diet, sleep, and hearing. Presented during the Neuroscience Educational Institute (NEI) Congress, Stephen M. Stahl, MD, Ph.D. highlighted these as major factors that impact our aging.

The benefits of exercise are commonly known as: increased energy boosts the immune system, supports oxygen and blood flow which decreases the risk of developing medical conditions. But another under-recognized benefit of exercise is that it promotes brain health. In the report, Stahl points to a study that highlighted the benefits of exercise on brain health. The study included 1740 participants who were 65 and older. Their engagement in exercise and brain health were assessed for over 6 years. Key findings of the study included that participants who exercised 3 or more times per week were 32% less likely to develop dementia compared to participants who exercised less than 3 times per week. Experts suggest that exercise improves episodic memory, attention, and cognitive processing. Both intermittent and consistent forms of mild exercise have been shown to improve cognitive performance.

Research shows that dietary patterns can also improve brain health by decreasing the risk of hearing loss. Hearing loss is a medical condition that can contribute to cognitive decline by decreasing the activity in the hearing portions of the brain. A 2019 study published in the American Journal of Epidemiology examined the link between diet, hearing loss, and brain health. This study involved nearly 82,000 participants who had their diet and hearing health evaluated every 4 years for 22 years. Researchers found that the participants who had healthier dietary patterns were:

These healthier dietary patterns closely resembled commonly recommended ways of eating including the Alternate Mediterranean Diet (AMED) and Dietary Approaches to Stop Hypertension (DASH). These diets are more plant-based and emphasize eliminating processed foods, incorporating whole grains, increasing intake of fruits and vegetables, and having meat in moderation. These diets support the healthiness of all of the systems that sustain the body including cognitive functions. This decreases the risk of developing conditions like hearing loss and cognitive decline.

Sleep disorders are common among adults. The Sleep Foundation estimates that 50-70 million adults have a sleep disorder, insomnia and sleep apnea being the most common. Additionally, nearly 35% of adults do not receive adequate sleep per night which for adults is 7-9 hours. As you’ve likely experienced, lack of quality sleep can impact wellness in several ways: increased irritability produces fatigue, makes concentrating difficult, etc. In addition to these symptoms, lack of sleep can also impact brain health. Stahl suggests that sleep deprivation increases the deposition of beta-amyloid. Beta-amyloid is amino acids or plaque deposits that are commonly found in the brains of people with Alzheimer’s. This means that the presence of beta-amyloid is related to cognitive decline. Stahl also explains that during slow-wave sleep which is achieved through receiving quality sleep, beta-amyloid is cleared. This emphasizes the importance of sleep and maintaining brain health.

The fourth factor which is less of a lifestyle factor is hearing loss. Hearing loss is the third most common medical condition people navigate today. It impacts older adults disproportionately, nearly half of all adults 75 and older have some degree of impaired hearing. Hearing loss impacts health in a myriad of ways including contributing to cognitive decline. Extensive research shows that untreated hearing loss can significantly increase the risk of developing conditions like Alzheimer’s. This is because hearing loss not only happens in the ears but also in the brain. Experts suggest that untreated hearing loss can cause cognitive overload and shrinkage of the hearing portions of the brain which reduces cognitive capacities. Treating hearing loss addresses this by providing significant support that maximizes hearing ability. Studies have shown that hearing aids strengthen cognitive functions which decreases the risk of decline.