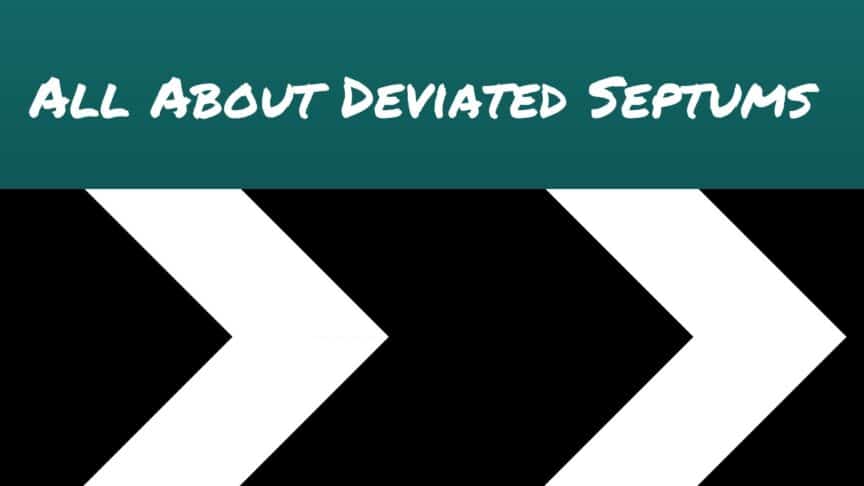 A deviated septum is characterized by the nasal septum being further on one side of the nose rather than centered. The nasal septum is made of bone and cartilage which forms a wall that separates the nostrils, dividing them into two. This constructs the left and right airways which facilitates breathing through our nose. For optimal airflow, the nasal septum should be centered, creating even nostrils. Though the nasal septum is slightly off-center for most people, this minor deviation is not particularly noticeable or impactful. When the septum is significantly situated on one side compared to the other, it is referred to as a deviated septum. This results in expanding one airway and restricting the other which can produce various symptoms that impact breathing and overall health.

Deviated septums can be caused in two main ways:

The most common symptom of a deviated septum is nasal congestion which affects airflow through the nasal passageways. Other symptoms include the following:

These symptoms can take a toll on sleep and daily wellness especially if experienced chronically. Experiencing a common cold or seasonal allergies can also worsen these symptoms. If you experience difficulty breathing and other symptoms recurring, it is important to see your healthcare provider who can assess your deviated septum and recommend effective treatment options.

Symptoms produced by a deviated septum can be alleviated with medications. However, if symptoms persist and are experienced chronically, the most effective treatment option could be corrective surgery.

When deviated septums are highly crooked or significantly deviated, symptoms can be severe and recurring which is a sign that you should be evaluated by a doctor.

The only way people can develop a deviated septum is through injury. So the best way to reduce one’s risk is to integrate and practice safety measures! This includes:

It is estimated that nearly 80% of people’s nasal septum is off-center. This typically is not noticeable or particularly disruptive. But deviated septums that are more significant can cause chronic symptoms that can take a toll – affecting breathing, sleeping, and health. If symptoms cannot be managed through medication, it is important to consult with your doctor. Treating a deviated septum can drastically improve daily well-being by enhancing sleep and airflow. Better sleep and the capacity to breathe with greater ease provide more energy which is necessary to navigate daily life.