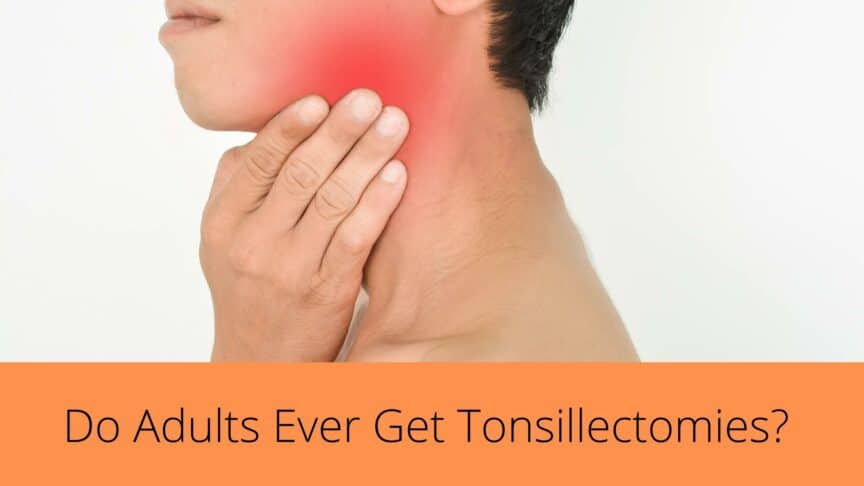 The tonsils are part of the lymphatic system that fights infection. They are two fleshy lumps of tissue at the back of the throat, one on each side. The tonsils help fight bacteria in the air that we breathe in. The tonsils produce cells that kill harmful germs and bacteria before they cause an infection.

However, sometimes the tonsils don’t fight infection effectively, and they can even be a site of infection. That’s when your doctor may recommend a tonsillectomy to remove your tonsils and prevent ongoing infections.

Tonsillitis is a painful infection and inflammation of the tonsils. Some of the symptoms of tonsillitis can include:

If you get tonsillitis, you’ll likely recover within one to two weeks. However, if you struggle to recover, or you have chronic tonsillitis, a tonsillectomy may be the best treatment option. After surgery, most adults will have a recovery period of about two weeks.

Tonsillitis is a lot more common in children and teenagers. This may be because school-aged children have a much higher exposure to germs and bacteria. If a child or teen has chronic tonsillitis, a tonsillectomy may be recommended. Children can recover quite quickly from a tonsillectomy, usually within one week.

A tonsillectomy is a surgery that removes part or all of the tonsils. This surgery can prevent further infections and improve overall health. It’s recommended for anyone with chronic tonsillitis or inflammation of the tonsils.

The Benefits of Getting a Tonsillectomy

There are many benefits when it comes to tonsillectomies. This surgery will prevent chronic inflammation or infection of the tonsils. It can relieve the symptoms of tonsilitis so you can get back to your daily life.

Are There Risks of Getting a Tonsillectomy?

It’s important to talk to your doctor about the risks of getting a tonsillectomy before booking your surgery. One possible risk is getting infections in other areas of the throat. For example, you can still get a sore throat or have strep throat even after a tonsillectomy.

During the first week after the operation, you may also experience bleeding as your throat recovers. Usually, the bleeding isn’t serious, but it’s important to carefully monitor any bleeding during recovery.

What Happens During a Tonsillectomy?

A tonsillectomy is a quick surgery. It only takes 30 to 45 minutes. This surgery is typically performed using general anesthesia, so you’ll be asleep during the surgery. Your surgeon will gently remove your tonsils and may also remove your adenoids at the same time.

There are several types of tonsillectomies:

After the surgery, your health care team will monitor your vital signs such as heart rate and breathing. As you wake up, you may feel nauseous or throw up. This is a common reaction to anesthesia. You will usually be ready to go home in a few hours.

Tips to Recover After a Tonsillectomy

After surgery, you’ll have a one-to-two-week recovery period. During this time, you won’t be able to do your normal activities and you’ll need to rest and relax while your body heals. As you recover after a tonsillectomy, you should:

Consult with Our Doctors

If you’ve been struggling with chronic tonsillitis, you may be considering a tonsillectomy. After a tonsillectomy, most adults report fewer sore throats and infections, fewer sick days or days off work, and fewer doctor’s visits. They also report better overall health and quality of life without chronic infections and pain. Consult with our team today to weigh your options and find the right treatment for you.