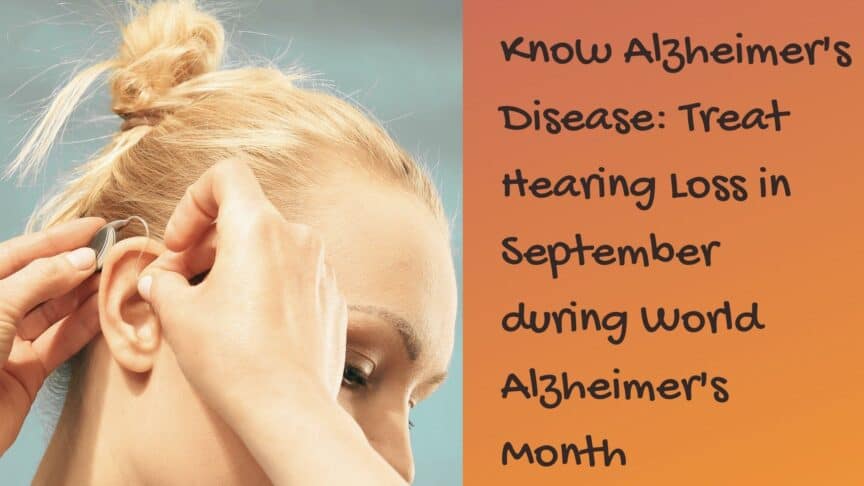 September is World Alzheimer’s Month, a great opportunity to prioritize your hearing health! Treating hearing loss reduces the risk of developing dementia – a group of neurological conditions that impacts 50 million people globally. The most common type of dementia is Alzheimer’s disease which progressively reduces cognitive functions related to memory, thinking, decision making, and learning. World Alzheimer’s Month, launched in 2012, focuses on raising awareness about the condition and challenging the stigma associated with it. You can participate in this global initiative by taking the simple step of scheduling an appointment for a hearing test!

Alzheimer’s accounts for up to 90% of the dementia that people live with today. It is a condition that gradually deteriorates essential cognitive functions. It often begins with mild memory loss and can progress into an inability to recognize family and friends, participate in a conversation, make decisions, and complete ordinary tasks.  This can take a toll on an individual’s personality; changing behavior, habits, and capacity to engage with others. People experiencing late stage Alzheimer’s may require assistance and greater care with navigating daily life.

Alzheimer’s is expected to rapidly increase, impacting more than double the amount of people by 2050. According to the Alzheimer’s Association, 6.2 million people currently live with Alzheimer’s in the U.S. This is projected to reach 12.7 million over the next few decades. Exact causes of the condition remain unknown and experts suggest that it is likely a variety of factors that contribute to its development. Research has also shown that changes to the brain can occur years prior to the onset of Alzheimer’s. This reveals a potential period of time where interventions can delay or prevent the development of cognitive decline. Studies highlight that hearing loss is a risk factor and that by treating hearing loss, cognitive capacities can be strengthened.

Untreated hearing loss can impact brain health in a variety of ways that reduces capacity. Extensive research examines the relationship between hearing loss and cognitive decline, establishing a significant correlation between these conditions. Major studies including research published in 2019 in the Journal of Alzheimer’s and Dementia highlight that people with hearing loss are more likely to experience cognitive decline. In this specific study which included over 10,000 people, cognitive decline was:

These significant findings not only show the correlation but also reveal that the degree of hearing loss can increase the risk. Researchers suggest that hearing loss leads to the inactivity of the areas of the brain that are responsible for the processing of sound. This inactivity reorganizes neural networks and can take a toll on cognitive functioning.

Fortunately, there are useful ways to treat hearing loss that can transform health and quality of life. The most common treatment is hearing aids which are electronic devices that absorb, amplify, and process sound. Equipped with the latest technology and innovative features, hearing aids provide significant support that maximizes hearing. This offers countless benefits including enhancing communication, improving relationships, and enriching social life. Hearing aids also improve overall health, including strengthening cognitive functions. Important studies that highlight the benefits of hearing aids on brain health include:

You can participate in World Alzheimer’s Month by scheduling an appointment for a hearing test! This is the most important step you can take to prioritize your hearing health and wellness. Contact us today to schedule an appointment.